The LA Rockers – Lifehouse are embarking on tour for the summer of 2017 and will be bringing with them Switchfoot for a co headlining performance. All of this will take place at White Oak Amphitheater on Tuesday 22nd August 2017! Don't miss this incredible show, release your inner child as Lifehouse take to the stage!

"We are amped to announce that we are going on tour with Lifehouse for the first time ever,” Switchfoot says. “We're calling it the 'Looking for Summer' Tour and we can't wait to sing these songs with you." 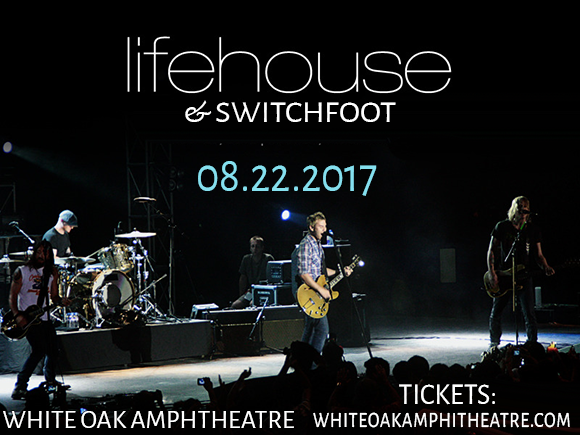 The American rockers, Lifehouse have had nothing but success since their very first debut back in the early 2000's – Jason Wade (lead vocals, guitar), Bryce Soderberg (bass, vocals) and Rick Woolstenhulme, Jr. (drums, percussion). These guys are the real deal and hit the number 1 spot with their single, "Hanging by a Moment" and then after their follow up album in 2002 which rocketed them again into stardom position.

Since then, Lifehouse released five more records that all made them the beloved band that all fans across the world follow them for.
All have spawned chart topping anthems such as; "You and Me", "First Time", and "Whatever It Takes", all have hit the top 40 positions in the US alone and have given them whopping sales of 15 millions records sold worldwide!

Join them as they travel to a venue near you this summer!