Prog rock giants Yes are about to embark on The YESTIVAL, a nationwide tour that sees fellow art rock exponents Todd Rudgren & Carl Palmer's ELP Legacy joining them for a night of epic music! Headed to White Oak Amphitheater on Friday 4th August 2017, it's going to be one hell of a show, with Yes performing a single track from each of their studio albums, beginning with their 1969 debut through 1980:

“We are looking forward to presenting songs from each of the first nine studio albums, including some surprises,” Yes guitarist Steve Howe says in a statement announcing the outing. 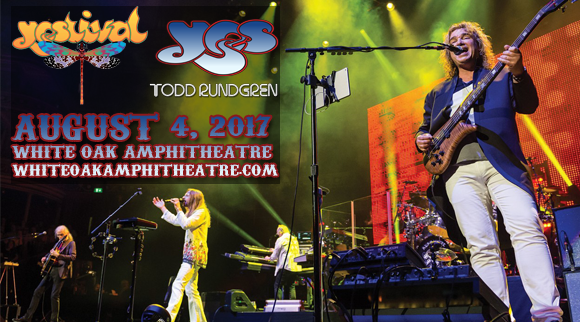 Formed in London in 1968, progressive rock band Yes was founded by singer Jon Anderson and bassist Chris Squire. With 21 studio albums under their belt, the band experimented musically with several different genres, from art rock to pop. Winners of the 1985 Grammy Award for Best Rock Instrumental Performance with "Cinema", the band received five Grammy nominations between 1985 and 1992. They have sold 13.5 million RIAA-certified albums in the US and were inducted into the Rock and Roll Hall of Fame in April 2017.